Deepa Mehta’s “Fire” was the first Indian film about lesbianism. The movie was released in 1998.

Fire – the films filled with love, desire and strong bond between women. The movie was developed from the book ‘Lihaaf’. This Canadian Indian film features Sita and Radha who played the lead and had an intimate and passionate relationship as their husbands chose to have an affair. The movie was written &directed by Deepa Mehta. The film also refers to the mystic stories of Hindu mythology and tries to evade all the social stigma. The movie was perfect in describing the contemporary Indian society.

Fire – tries to represent the incarnation of Lord Lakshmi which is evident through their character names – Sita and Radha. Fire gives us an insight of pure love between women and how they can make an independent decision. It is relevant even today as it shows how misogynistic people view women as an object. Fire would have been a movie that would have been taken more seriously under the feminism wave if it had not focused much on love. The film is the perfect example to state marriage that has gone bad.

The movie revolves around the relationship between Sita and Radha played by Nandita Das & Shabana Azmi.  Both women experiencing lack of love from their husbands, start spending a lot of time together. Sita and Radha also develop a sexual relationship. Their relationship is explained as the experience they deserve to receive which is a consequence of their doomed marriage.

The movie does not only focus on a relationship but also explores female sexuality. The film is the best example that shows the female sexuality being in denial and how women are suppressed to carry out ‘duties as a wife by giving birth’. Also, the movie tries to portray what women are expected to do once they get married. There are additional scenes where the wives are asked to learn embroidery and keep themselves engaged as their husbands are busy with their affairs.

A scene depicts Radha and Sita observing the fast of Karvachauth for the long lives of their respective husbands. Sita does not want to observe the fast, but she did not have a choice. Thus, expressing her discontent to Radha she says, “Isn’t it strange that we are so bound by customs and traditions that somebody just has to press my button, a button marked tradition, and I start responding like a trained monkey.” In reply, Radha explains the history of the tradition to Sita and finally says, “The only reason why we are expected to observe this fast is to prove how loyal and devoted we are to our husbands.”

The Fire is not all just about women and relationship between two women. It also reflects the way Indian families operate. The men were pressurized for the wedding that they were not ready for;and soon after forced to give birth to a child. It is towards the end of the movie, the men in the movie speaks about what they wanted and why it is not easy in their life to be juggling between work and home without knowing what they want. 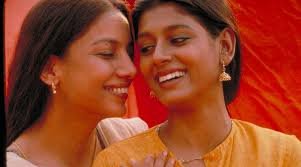 Radha confesses about her relationship with Sita to her husband. Though it is an incomplete ending the movie tries to connect the scene with Hindu Mythology Ramayana. “When Rama asks Sita to walk on the fire to prove her that she did not have a sexual affair and then Sita walks out of the fire safe;” here, Radha’s saree is caught on fire and she escapes unharmed which establishes that the love between Radha and Sita is pure.

Is Gaydar a real thing?

Coming out of the closet as Trans

Corona Virus helped me to make my family understand my sexuality

A group of researchers from the Columbia University are testing the ‘smart’ headphones system. A prototype has been built to warn the pedestrians of...
Read more

Deepa Mehta's "Fire'' was the first Indian film about lesbianism. The movie was released in 1998. Fire - the films filled with love, desire and strong...
Read more